Here is a Facebook link to some pictures of todays work detail. Members of the Glen Rock Church of Christ Youth Group came to the station to lend a hand.https://www.facebook.com/media/set/?set=a.210...
Read more »
Public CPR Training Class
Sat. Aug 12th 2017

Glen Rock EMS Inc. is offering an American Heart Association CPR class for the public. The course will include adult, child, and infant CPR, as well as the use of an AED. October 19, 2017 from 6:30 PM...
Read more »
Dementia Seminar - Public invited!
Tue. Sep 20th 2016

Please join us for an informative presentation on dementia. Con-ed credit for EMS personnel is being applied for. This is a FREE seminar.
National Night Out
Mon. Aug 8th 2016 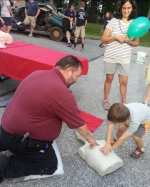 Here are a few pictures from the 2016 National Night Out in New Freedom, coordinated by the Southern Regional Police department. Thank you to all that turned out to support the event, and to enjoy the...
Read more »
Out With The Old .....
Mon. Aug 8th 2016

Out with the old, and in with the new. Today we replaced two of our three roof top combination air conditioner / heating units at a cost of approx. $12K. We will also be coating the roof to elimina...
Read more »
About Us 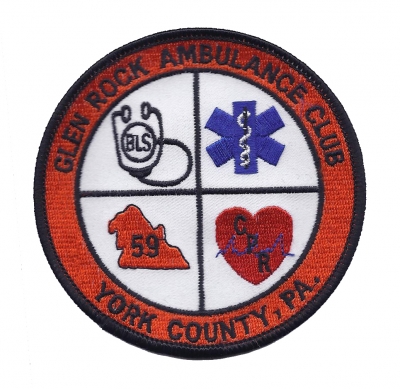 The following history was, in large part, obtained from information written for the Glen Rock Sesquicentennial book and was supplied to us courtesy of John “Otts” Hufnagel. Thanks Otts!!!
Prior to official ambulance services being organized in a community, this service was provided by the Funeral Home. This was the case in Glen Rock. The Geiple Funeral Home used their hearse as an ambulance. A placard was placed on the side of the hearse that said ambulance and in some cases they may have had a light for the vehicle as well. A circa 1930’s picture of a sign at the entrance to the Geiple Funeral Home says “Geiple Funeral Home and Ambulance Service”.
During the 1943-1944 Glen Rock Lions Club year, they set up a fund of $800 towards the cost of an ambulance for the community. During the 1946-1947 Lion year they placed the order for a fully equipped ambulance to be presented to the community, at a cost of $6,000. The ambulance was maintained and operated by the Lions Club members. To put this price in perspective,  a new ambulance is estimated to cost $175,000 or more.
Prior to the 911 system, when you needed the ambulance in town, you called Keller Motor Service or H.C. Geiple and Son during the day only and during the night you could call James Kroh, H.C. Geiple, George E. Geiple, or Emory Patterson. You could call Kenneth A. Keller during the day and night. Ken Keller was very active in the operation of the Lions Club Ambulance.
Note: The current location of the Glen Rock EMS at 59 Water St. in Glen Rock, was the former location of Mr. Keller’s business, The Glen Rock Garage, and was dedicated as the “Keller Building” by the members of the Glen Rock Ambulance Club, following purchase of the building from Mr. Keller’s estate.
In the 1950’s, a county wide ambulance wide ambulance association was formed. When this happened, it enabled ambulance groups to offer memberships to individuals or families in their service area. During the 1956-1957 Lion year they organized the Ambulance Club enabling any person or family to have complete ambulance service for a small membership fee.
The majority of ambulances purchased over the years by the Lions Club have been made by Cadillac. During the time the ambulance was operated by the Lions Club, the ambulance was kept in the Glen Rock Hose and Ladder Company building. In June 1972, the Lions Club ambulance was not removed from the fire hall in time and ended up floating in the waters of Hurricane Agnes.
On November 5, 1973 the Glen Rock Ambulance Club was officially incorporated. The original members listed in the Articles of Incorporation include Rev. Edgar Steedle, George E. Geiple, Roger L. Shearer, and Donald A. Van Meter Jr. Shortly after the formation of the new organization, a new ambulance was ordered. When it arrived it was the first box type (Type I) ambulance in the town’s history.
In the spring of 1975, Sterling Wertz and Norman Ness build a separate building beside the fire hall to house the ambulance. The ambulance remained at this location until 1991, when the Glen Rock Ambulance Club purchased the former Keller Garage property at 59 Water Street. After major remodeling, the new building was dedicated on November 14, 1991.
Billing Inquires

Glen Rock EMS Inc. contracts an outside agency for all of our billing and collection needs.
EMS crews at the station will not be able to answer billing related questions.

Please contact the service below for ALL billing related questions.

Copyright © 2006-2021. YourFirstDue Inc. All Rights Reserved. Designated trademarks and brands are the property of their respective owners. Content on this web site is supplied by Glen Rock Emergency Medical Services Inc.. YourFirstDue Inc. cannot be held responsible or liable for any content, text, pictures, or any other media found on this web site. Maintained by the members and staff of Glen Rock Emergency Medical Services Inc..
Management Login
Powered by